Is This Alphabet Soup? 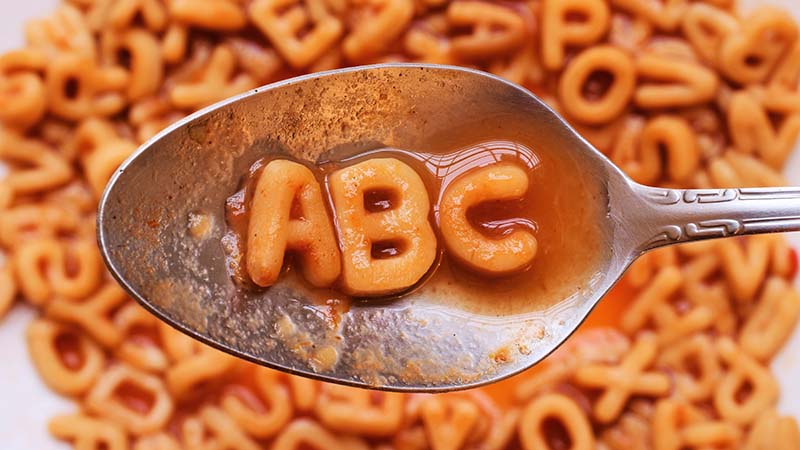 Recently I read something that, at one point, used four different abbreviations[1] repeatedly on a single page. I was taken aback until I read further and saw that there were seven. In fact, the more I read, the more abbreviations I found. Every time the author used a term more than once, they turned it into an abbreviation. Ultimately, there were several parts of this otherwise lucid manuscript in which there were so many capital letters that it looked like an eye chart.

I am not talking about medical charts, of course. Those are basically a form of shorthand. For example, on Figure 1, an app that medical professionals use for education and collaboration, there are three images, under which the relevant clinician posted the following:[2]

There is a lot of information here in a very small space, and, given the context, no one is going to mistake BID for Sotheby’s common stock when it’s supposed to be b.i.d. (bis in die)—twice a day. Reading a full-length article like that would be impossible. As an aside, putting BID on a prescription bottle could have dangerous results for a consumer who is unfamiliar with the term and simply ignores it.

So when do we abbreviate and when don’t we? For illustration, I’ve made something up:

Scientists perform surgical procedures (SPROC) on animals and then kill them (KT). Then scientists analyze the results (ATR) and report them (RT). They divide people into experimental groups (EG) and administer experimental medications (EM) or placebos (PS) in double-blind controlled experiments (DBCE). Maybe the investigators are using data obtained by NASA, or obtaining DNA as part of a genetics study (GS), or researching causes of slipped capital femoral epiphysis (SCFE). Generally, no one expects political demonstrations (PD) by ocelots and manatees, regardless of their socioeconomic status (SES) but they have formed a PAC called OMPAC.

In many SPs, professionals report that SPROCs involving animals in DBCEs involve people who ATR during holidays, and then RT. Lately, OMPAC has been pushing for legislation that allows ocelots and manatees of all SES to administer EMs at random to scientists. It is important when reading about DBCE on ISS that are sponsored by NASA, they may or may not involve GS or SCFE.

Those of you who read academic prose know that it really can get that bad, even without the involvement of manatees.

What do the style manuals and other treatises say about abbreviations? Authorities are mixed.[3] But the words in a biomedical writing textbook, Essentials of Writing Biomedical Research Papers, Second Edition[4] bear repeating. Right in the first paragraph of the whole book, the author laments the badness of writing in much of the literature in biomedical research. “The extreme example is a paper that gives overwhelming details about what others have found. . . exhaustive lists of variables measured (generally written as an alphabet soup of abbreviations).”

About this issue, I polled fellow members of Editors Canada, a professional association that has members from all over the world. Then I asked and received permission to use their names and their responses on my blog. Here they are:

Wendy Baron: My mind swaps out the acronym for another noun—(organization) embraces (business model)—or just calls them ‘blerp’ when I encounter them repeatedly.

Merrie Bergmann: Retired professor and researcher here. If the acronyms are well known or it is easy to remember what they stand for, they definitely make research findings easier to read. Examples from one of my academic disciplines (computer science): FIFO for first-in-first-out queues vs. LIFO for last-in-first-out queues, DFS for depth-first search vs. BFS for breadth-first search.

Madeline Koch: I often do remove the ones that are created just for convenience (although not always) or are only used by a very small group of people, especially if they’re surrounded by all those well-known and common ones.

DM Stein: I feel like the eye starts to skip over them after a while. Akin to jumping over a foreign term or a word the reader doesn’t know and hoping it’ll become clear from the context. I would argue that abbreviations almost always weaken a manuscript.

I agree that throwing a bunch of capital letters across the page is annoying and that the reader’s eyes begin to skim over them. But I think there is a real difference in using true acronyms (esp. those that have become nicknames, like LIFO and FIFO, and using initialisms.

I see the problem in a thesis but in the article that my students are editing why aren’t they choosing 2nd person pronouns and active voice instead of leaving: The personal information received by VAC may be shared with other VAC programs… It can be: We may share your information with our other programs…

Other style guides are similar too. I think it depends on the audience. Medical content is peppered with abbreviations, and if the readers are already familiar with them, it may in some cases actually make the text more readable to use the abbreviations. I can’t imagine using certain terms spelled-out in full repeatedly. However, if the audience will be unfamiliar (say it’s a general audience or an undergraduate student textbook), too many abbreviations do obscure the content.

If I were editing the manufactured blurb about manatees and ocelots, I would advise the author to eliminate all but the following: NASA, DNA, PAC, and SCFE. And OMPAC. The first three abbreviations are common and their usage eliminates a lot of syllables. Although most lay people would not recognize SCFE, it is an acronym well-known to many medical professionals. OMPAC is the name of an organization. The rest of the abbreviations aren’t necessary, even SES, which is not an uncommon one in the social sciences. In part, that’s because, socio-economic has changed to socioeconomic, but also because there is no good reason for adding yet one more abbreviation to the mix.

It’s also fair to consider that many specialists may read outside their fields. If your readers have to remember a list of abbreviations or have to contend with alphabet soup on the page, they may skip your work and go on to the next article.

[1] Abbreviations take many forms, including acronyms and initialisms.

[2] Scrubmom, Surgical Technologist. Figure1 is an app on iPhone and Google, and only medical professionals are allowed to comment, which is a thing of beauty and a joy forever, because there seems to be a total absence of woo. The images, by the way, are hardcore.

[3] The Publication Manual of the American Psychological Association, 6th Edition: Section 4.22 Use of Abbreviations: “To maximize clarity, use abbreviations sparingly.” While APA 6th doesn’t prohibit the use of them, it says, “in general, use an abbreviation only if (a) it is conventional and if the reader is more familiar with the abbreviation than with the complete form or (b) if considerable available space can be saved and cumbersome repetition avoided.” The Chicago Manual of Style, 16th Edition, is more forgiving. It merely suggests, in section 10.3, that editors create a table of abbreviations if there are too many of them. The Scientific Style and Format, 8th Edition, cautions in section 11.3.1, “Avoid abbreviations in running text except for those that are widely used in the particular context of the document.” I don’t know what that means. The style manual of the American Medical Association, the AMA Manual of Style, 10th Edition, has a section on the use of abbreviations that is quite lengthy (14.11), and that focuses on possibilities of error that can affect patient safety. It also provides a list of abbreviations.

← Previous: Don't Touch the Kimono Next: A Proposal for the Uniform Certification of Copyeditors →