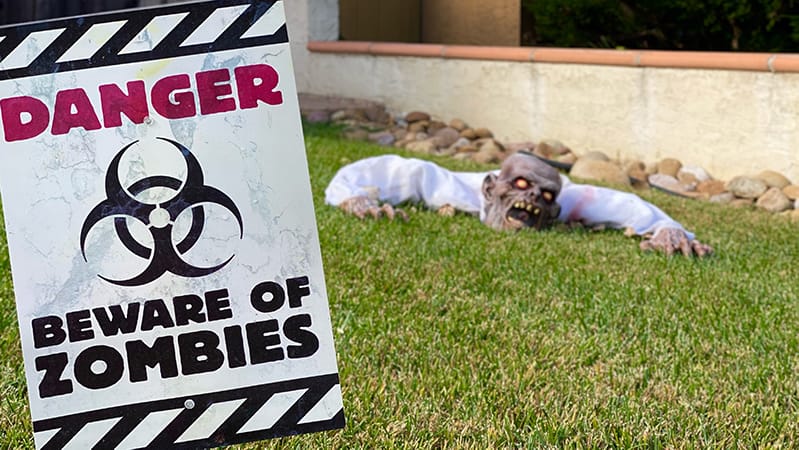 When someone goes to the store, they should wear a mask so they don’t spread COVID-19.

Yes, they. Because it’s the correct singular pronoun to use when you don’t know the gender of the person you’re talking about or when you could be talking about any of them. Usage of the singular they is both old-fashioned and new, both at the same time.[1]

The Prohibition is a Zombie Rule

What’s a zombie rule? They are rules that aren’t but won’t die. According to Geoffrey Pullum, a linguistics professor and co-author of The Cambridge Grammar of the English Language

, “Though dead, they shamble mindlessly on.” David Marsh, who teaches a grammar master class for the Guardian, lists some of them, including, for example, the familiar prohibition against the split infinitive. To give you an idea of the bizarre logic of some of these zombie rules, this horror of split infinitives comes from a Latin fetish. Latin used to be the language of the educated, and so, the logic goes, English should imitate Latin, and so, the logic goes, the use of English infinitives should mirror Latin ones. But Latin present infinitives are one word long.[2] Logic is nowhere to be found.

Guilty also of this kind of nonsense is the unbearable Strunk & White.[3] The authors violate their own rules throughout their own book and recommend a prose so arid it might as well be a recipe. (A discussion of writer’s guides to grammar, usage, punctuation, and other mechanics is beyond the scope of this blog post, but start with Dreyer’s English.)

What’s the logic behind the default he? Blame the Victorians, who believed that men were the default people and women were too childlike and weak to act on their own.

The Queen is most anxious to enlist every one who can speak or write to join in checking this mad, wicked folly of “Woman’s Rights”, with all its attendant horrors, on which her poor feeble sex is bent, forgetting every sense of womanly feeling and propriety… It is a subject which makes the Queen so furious that she cannot contain herself. God created men and women different – then let them remain each in their own position.’ (Queen Victoria, letter 29 May 1870)

Today, of course, that ideal is mostly dead. Thus, most people know that using he all the time is problematic. So they begin to twist their writing unnaturally and even awkwardly, using one, alternating he and she every paragraph, he or she, or (just don’t) s/he.[4] It doesn’t need to be that complicated. Use they. It will not be a sign that the Great Unlettered have successfully corrupted the English language one social media comment at a time. It will not bring on the Apocalypse. The statues won’t weep. Libraries won’t spontaneously combust. You’ll just have used a pronoun so innocuous many readers won’t even notice it.

The prohibition against they is artificial and only about two hundred years old. People who hate the singular they often can’t remember exactly where they learned the prohibition, but, much like those urban legends about the scuba diver sucked into the aerial water bomber or person surviving a fall in a plummeting elevator by jumping at the last minute, or the word news coming from north, east, west, and south, the story sounds true, so it must be, and so they think it’s a fact.

Or worse, they don’t like it, so they think it must be wrong.

The problem is that people who oppose the singular they have short memories. Or why don’t they insist that it’s wrong to say you to more than one person when it was supposed to be ye?

The Singular They Is Traditional English

Turning our attention to back to they, linguist James Harbeck points out that

for centuries, English speakers used they for gender-indeterminate third person singular, and no one complained.

For centuries? Oh yes – pretty much until about 1800, in fact. You can find it in the King James version of the Bible: ‘Let nothing be done through strife or vainglory; but in lowliness of mind let each esteem other better than themselves’ (Philippians 2:3). You can find it in Shakespeare: ‘There’s not a man I meet but doth salute me, As if I were their well-acquainted friend’ (Comedy of Errors IV:iii). It was common and unexceptional.”

Tom Chivers, who is the assistant comment editor for the Daily Telegraph, wrote,

What’s Wrong With Just Using He?

Why not just use he? Consider these sentences: Before a writer seeks to publish, he should hire a professional editor. Almost half of you are female. (I say almost because some people identify themselves as transgender or gender fluid.) Why make all but those who identify as male have to tell themselves, But she means me, too? Then there’s this type of problem: When a student wishes to become a virologist, he should take science courses as an undergraduate. We default to men for an entire profession. Those who are not male have just been bumped out of the writing and have to readjust their thinking before they proceed. Oh. The guidance counselor is talking about me too. Or they have to decide that in 2020 (at the time of this writing) the author doesn’t mean to exclude women. One of the biggest challenges for writers is to keep readers engaged. When you bump them out of the manuscript because they have to make a mental adjustment, you at least for the moment disengage the reader.

I’ll be direct and admit that I don’t care whether the usage is as old as it really is or whether it is new, and I’m a prescriptivist by nature. In other words, I believe that grammatical rules should be followed unless there is a reason not to. That means that I believe that apostrophes don’t belong in plural nouns just because a lot of people haven’t absorbed the difference between six ocelots and six ocelot’s in the local zoo.

In contrast, descriptivists might say they is fine because that’s what people are using anyway. Some would even agree that pregnate for pregnant is fine too and to hell with the word its. Of course there are gradations of descriptivist thinking. Anyway, I agree with descriptivists that the language should change when refusing to let it change serves no purpose or is detrimental to communication.

But when it comes to pronouns, the needs of the English language have changed. You could try to work around the problem by using an alternative, even if the alternative is cumbersome and ponderous (like using s/he, or even some totally made-up pronoun altogether), but why? We need the singular they because today we don’t want to automatically exclude at least half the population when we write or speak.

What’s interesting about the singular they is that there is a basis for descriptivists and prescriptivists to agree.

What Do Other Authorities Say?

More and more style guides and other authorities have embraced the singular they. The Washington Post did so in 2015. In 2016, Anne Curzan, a keynote speaker at the ACES: The Society for Editing, a linguist and professor of English at the University of Michigan, suggested that you ask yourself why you aren’t allowing it. “Because I don’t think people notice it,” she said. This is, interestingly, a good point, and it’s worth listening to speakers in formal contexts, because many of the same people who won’t accept it in print will use it, themselves.

In 2016, a managing editor from the New York Times pointed out in the Columbia Journalism Review that “Though people have been using what’s called the ‘epicene they’ for hundreds of years, grammarians started demonizing it more than 100 years ago.”

Also in 2016, Supreme Court Justice Sonia Sotomayor used the singular they in a published Supreme Court opinion: “‘Section 2252(b)(2)’s list is hardly the way an average person, or even an average lawyer, would set about to describe the relevant conduct if they had started from scratch.’ (Lockhart v. United States, 136 S. Ct. 958, 966 (2016)).”

In 2017, the AMA Style Insider, the voice of the AMA style guide, grudgingly accepted it, saying that

The AMA Manual of Style will follow suit with the next edition, allowing the use of plural pronouns with singular indefinite antecedents (eg, Everyone allocates their time) in an effort to avoid sex-specific pronouns and awkward sentence structure.

Even though there’s more flexibility with the singular they than before, in most cases rewording usually is possible and still always preferable, especially in formal writing.

In 2019, the American Psychological Association revised their style guide, which is used by a good proportion of the academic (and forensic) world. APA 6th is no more; long live APA 7th:

Big changes are afoot! APA endorses the use of “they” as a singular third-person pronoun in the seventh edition of the Publication Manual of the American Psychological Association. This means it is officially good practice in scholarly writing to use the singular “they.”

Also in 2019, the Michigan Bar Journal ratified the singular they: “The flexibility gained is in avoiding the clumsy he or she, capturing collective nouns with increased comfort, and respecting those who prefer a gender-neutral pronoun. Attorneys, as wordsmiths, should embrace these changes, or at least begin to.”

In 2020, the Modern Language Association endorsed the use of the singular they. No, that’s not entirely accurate: “the MLA encourages writers to accept its use to avoid making or enabling assumptions about gender.” [emphasis added]

Not, however The New Yorker.

Gael Spivak, former president of the Executive Council of Editors Canada, has compiled a reference list of authorities that the singular they is proper and grammatical.

So Here We Are

The singular they has been around longer than it hasn’t and is accepted more often than it’s not. It’s so natural that people who claim they hate it use it themselves without noticing. If you are an editor, and you don’t like the singular they, then by all means don’t use it in your own writing. But your personal objection to the singular they doesn’t provide you with a professional justification for changing it in someone else’s work. If you are author, go ahead and use it — In fact, you probably should without more.

[2] Thank you, Mrs. Sleeper, Herndon High School Latin teacher (and one of my three best teachers ever). And thank you, random Monty Python centurion, for the discussion of the Latin word for go; I needed the review.

[4] Each use of s/he should be punishable by having to sit in a room and listen to five hundred repetitions of Paul Anka’s “You’re Havin My Baby.”

← Previous: Preventing Conflict: The Ins and Outs of an Editing Contract Next: Watch Your Language → 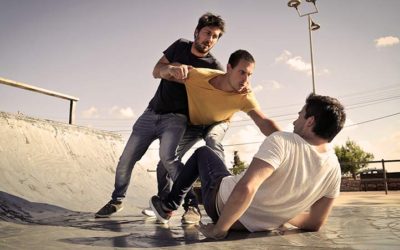